Picture Christopher Columbus standing on the coast of Atlantic Ocean, looking at the distant unknown, for a new opportunity. Remember Neil Armstrong and Buzz Aldrin setting their feet on the soil of moon, first human being touching the surface of a foreign planetary object. Brave men on new frontier working relentlessly so that mankind can learn.

And learning is what we do, every day. It’s one of the very things that pushes us forward and gives hope that world will someday be a better place for everyone. But it’s not just learning in old ways. As the world changes, so must the ways we learn.

Let us look back to history again, for different kind of new frontiers. We’re in London, where men and women of Thrale’s brewery prepare to brew beer for court of Catherine II of Russia. Russia was far away and the weather there was cold compared to London, so the beer needed to both survive the long trip and to fit the often demanding winter times.

This was the birth of imperial stout, which is to many the king of all beers. Dark as night, heavy on alcohol and full of complex, malty aromas. Today imperial stout is often seen as the ultimate challenge to both brewery and beer tasters. Getting it just right takes skill, being able to apprehend its relentless assault to taste buds demands courage.

So here we are, bearing the torch of the digital transformation of learning. We’re building an empire to forever change the way we use computers to learn. Hailing from the wild north we’re raising our flag on new cities, new countries, new continents. It’s our goal to command and conquer, to make tomorrow’s world even better.

What would be a better way to celebrate that than to make a beer that’s just as bold as we are? Like English brewers over 200 years ago brought the fruit of their craft to distant lands, we are bringing Valamis – Learning Experience Platform to people all around the world. To symbolize that we present Command & Conquer, our biggest beer yet. Once again brewed in magical cauldrons of Hiisi brewery it’s the very epitome of Finnish craftsmanship. Despite the growth of our empire we’re still not forgetting our roots. That’s why our imperial stout has a touch of lingonberry to remind us of Finnish nature.

So enjoy the result of third collaboration between Valamis and Hiisi brewery: Command & Conquer. It’s a big, bold beer that challenges you to think anew. Let’s cross that ocean together and find a new world. 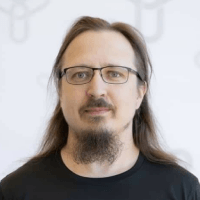 Juho Anttila has been working in IT-industry for almost 25 years in variety of software development, architecture design and team lead -related tasks. In Valamis Juho is responsible of technical leadership of product development. Juho is a DevOps enthusiast whose biggest ambition is making Valamis an elite level performing technology organisation.