Everyday explorer on the lookout for new challenges

Evgeny Matyuhin grew from a Software Developer into a Product Lead by requesting for more opportunities to grow and develop every year.

The waves hit the river Pielinen’s bank with an increasing frequency as the strong wind starts blowing in gusts. A man dressed in fisherman’s gear stands on the riverbank in the middle of tall reeds, not batting an eyelid.

Evgeny is attuned to handling a fishing rod. He has been spending time in boats and holding a rod since he was a little boy. He throws the lure far into the river and then starts reeling it in. This time there’s no fish, but that’s okay. The Valamis DevDay brought Evgeny from Petrozavodsk to Joensuu. All the Valamis employees around the world get together every year in order to learn, develop and, just as importantly, to meet each other. After the development day, the employees have had a summer party and relaxed together.

Now both the development day and the summer party are over and it’s time to head back to Petrozavodsk. But before that, luckily, Evgeny still has some time to stand by the river and observe its current. 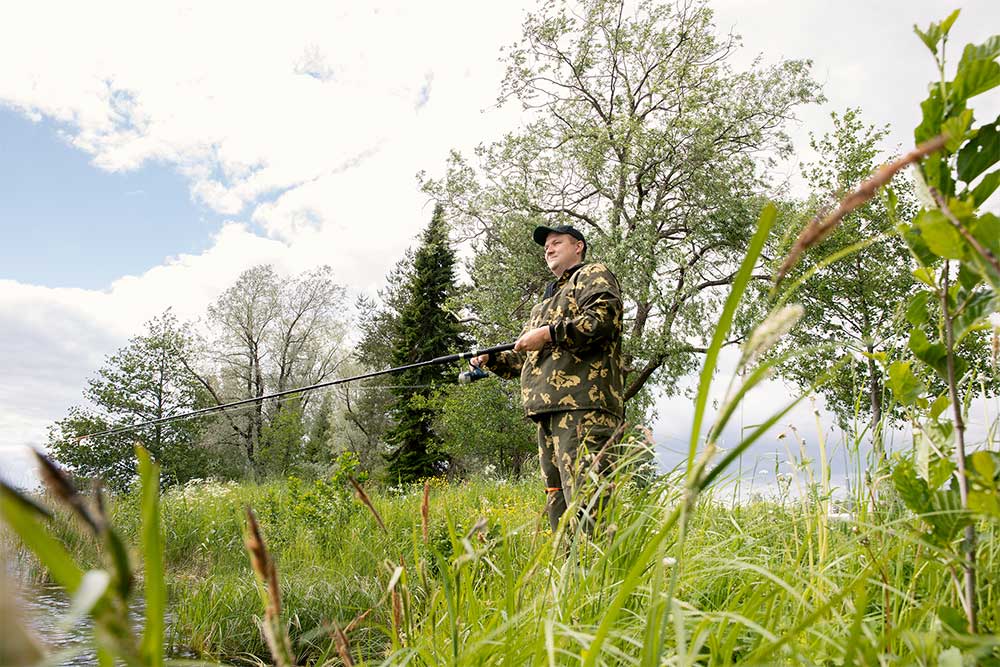 – Fishing is all about the hunt. It’s about battling with the fish and getting to know new landscapes. With my father we oftentimes let the catch go, back into the nature, Evgeny says.

Evgeny rarely goes fishing alone. He is usually accompanied by his father, a passionate fisherman, or his older son who is now big enough to hold the rod.

– I wouldn’t call fishing my hobby, because to me hobbies equal routines. I dislike routines, Evgeny says and laughs.

The routine-avoiding family man is driven by his desire to develop. It’s the same desire that originally drew him to Valamis, and the desire is still strongly present.

Years ago, during one of his trips to Finland, Evgeny’s father saw a tiny advertisement in a free newspaper: Arcusys (today Valamis) is establishing a new office in Petrozavodsk and looking for new employees. The vacancy was for a Software Developer, which fitted well into Evgeny’s competence profile.

– My father suggested that I should apply. I did enjoy my job at the time, but I did think that the advertisement was some kind of a sign.

And it really was. Soon after finding the advertisement for the Valamis position, Evgeny’s workplace of the time closed its doors. The man had to choose which path to take in order to advance in his career. Valamis was using different technologies compared to those Evgeny was used to using as a software developer. There was only one employee he knew from before, so the choice was not an obvious one.

– I was attracted by the idea of learning new things, as well as by the Valamis employee benefits that were significantly better for someone like me with a family to take care of. I also wanted to try working in an international company and use English as the working language.

For over one month, Evgeny was given one single assignment per day by his colleague. Even that was challenging, as everything was completely new. Evgeny got familiar with the new technology one assignment at a time and, little by little, work started to run smoothly.

– Valamis has invested a lot in myself, supported my development and given me new opportunities to learn. The fact that a company cares for its employees means a lot to me.

Five years have passed since launching his Valamis career and Evgeny has just started in a new position as a Product Area Lead. Thanks to his determined attitude, Evgeny has gone a long way not only as a Valamis employee, but as a person, too.

Evgeny was a very quiet child. He rarely spoke and when he did, only a word or two came out. As the years went by and he still remained shy, Evgeny applied to university with two main goals: he wanted to become a better and braver communicator.

The first step towards this goal was to summon his courage and place an order at a shop counter. The next step was to talk to his fellow students both in and outside of lectures. Evgeny felt the need to get to know different kinds of people and to soak up new courage for his communication skills from the university atmosphere.

– Before Valamis, I didn’t really speak English, which means that I have learned to communicate in a whole new language. Thanks to my new job description, I’m more in contact with my Joensuu colleagues, which means that I get to practice English quite a lot.

During this interview, Evgeny looks up one word from a translation application that he does not immediately remember in English. Otherwise, his speech is very fluent. You would not guess that the chatty manager used to be quiet and shy as a child. 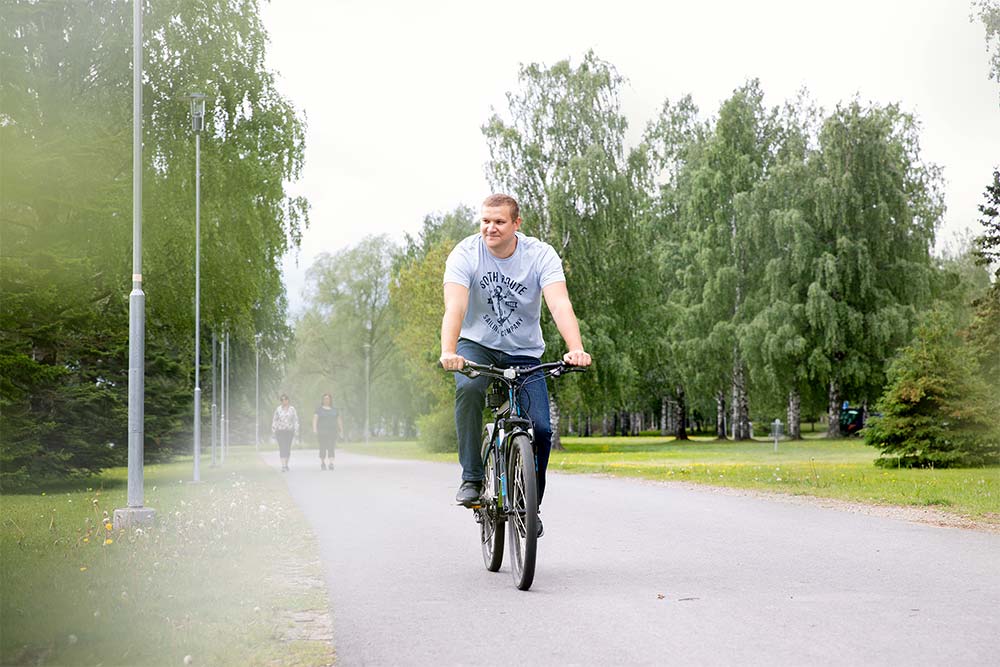 – The Finnish culture works well for me. I am pleased that the culture is visible in the Valamis workplace culture at the Petrozavodsk office, too. Valamis looks after the balance between work and family life well, which is something I highly appreciate. In this way, I have more time for my children and family.

Evgeny has a wife and two sons, aged two and nine.

– The first years in a child’s life are all about continuous learning and developing. It’s great to be able to witness that. Our sons have quite a big age difference, which means that the older one is able to help with taking care of his younger brother.

The younger one doesn’t yet have the fine motor skills to hold up a fishing rod or a bicycle, but the older one has already inherited most of his father’s interests, from computers to cycling and fishing.

One of Evgeny’s dreams came true when he found a bicycle roof rack for his car that fits the whole family’s bikes. The roof rack is something uncommon in Petrozavodsk and the people sometimes raise their eyebrows, but Evgeny is very proud of it. Now the whole family can take off and head outside the city in order to get to know new landscapes and locations.

– In my hometown Petrozavodsk I often get on my bike and start pedaling towards some neighborhood, forest or a compass point. When I arrive at a crossroads, I don’t look at the map but rather pick a direction that feels good. Once I pedaled along a forest path for ten kilometers just to discover that the path wasn’t good at all. I ended up in the middle of a swarm of mosquitoes! But that’s okay, at least I got to know a new path.

The explorer of his own life would preferably end each of his bike trips on the sauna bench in order to best relax and wash away the outdoor dust. Unfortunately, he does not currently have a sauna in his home.

– That is my second dream. To have my own sauna. 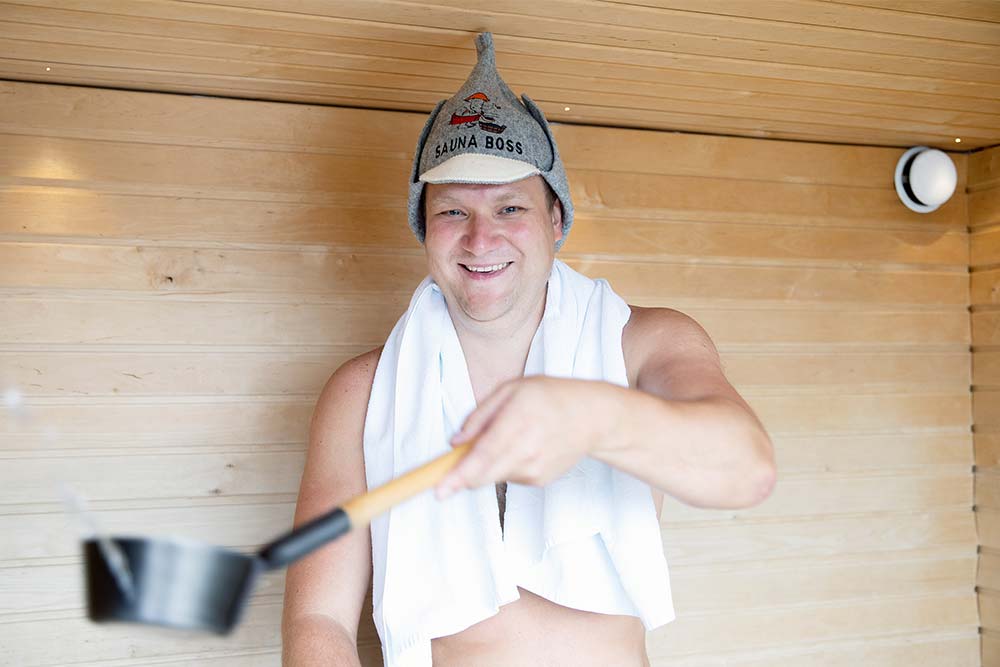 Luckily Evgeni’s parents have one. They live in Kostomuksha, only 35 kilometers from the Finnish border. When Evgeny visits his parents, they heat up the sauna for him every night. As a symbol for this tradition, Evgeny digs out a felt hat from his bag that says “Sauna boss” in the front.

– Every time I know I’m coming to Joensuu, I make sure to reserve the Valamis headquarters’ sauna premises for myself, as I don’t want to miss my chance to enjoy it, Evgeny says.

As the Product Area Lead, Evgeny works both as a team leader and a Product Owner. It’s his responsibility to lead the development projects of his product area, help the members on his own team with different challenges, design projects and to make sure that the projects are advancing. Whenever needed, Evgeny switches on his Developer skills and helps others to solve problems.

– I am motivated by new challenges and communication. My work includes a lot of challenging problem-solving that enables me to combine different skills, including my communication, project management and development skills.

At the Petrozavodsk office, there are various options for taking little breaks in between working. Instead of the traditional break time activities, like having a cup of tea, Evgeny often opts for playing darts or table soccer.

– Playing effectively empties the mind during a workday. It’s a great way to rid oneself of working for a moment.

Although Evgeny does not really care for routines, playing darts has become a break time tradition. In addition to playing darts, the continuous desire for new challenges is ever present in his everyday life.

– Every year, when I sit down at the development discussions, I ask for the same thing. To have new responsibilities. And I have always gotten them, the newly appointed Product Area Lead says and smiles.