From the countryside to the stars

Valamis’ Chief Commercial Officer Janne Hietala does video conferencing with NASA in the farmlands and took an astronaut to the Joensuu marketplace to try Karelian pasties.

Steam swirls into the frosty air as Janne Hietala scatters hot water onto his camo-patterned wetsuit. For a while, the water keeps him warm here between the eskers in Ylämylly, Liperi, only 650 ft away from Janne’s home. The clear water in Lake Leinonen is only 41 degrees Fahrenheit – so cold that without a wetsuit a human would get hypothermia in ten minutes. Janne loads lead weights totaling over 13 lbs. and jumps without hesitation into the water.

The surface of the water calms down before Janne returns to the surface again about 65 ft away from the dock. For a layman, diving seems tormentingly long, but, for a free diver, it is only warming up. Janne’s personal record in free diving for distance is 175 meters (574 ft) in about two and half minutes. He has dived up to 45 meters (150 ft) deep without equipment.
“I tend to joke that I can hold my breath for as long as it takes the customer to agree on the deal,” the CCO shouts from the water. 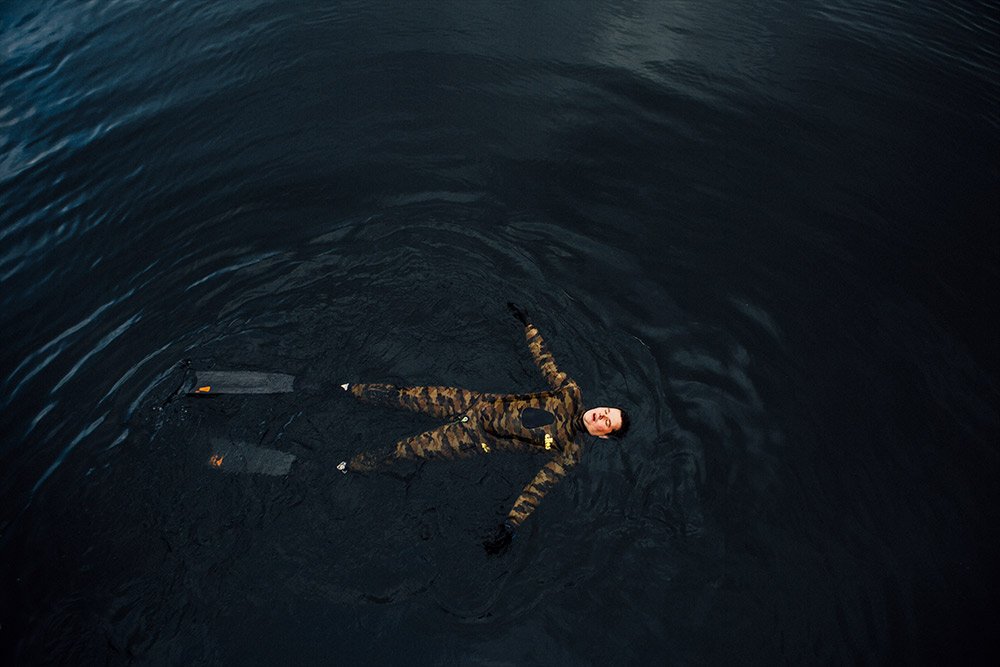 When you have partners such as NASA and the University of New York, the Chief Commercial Officer must have the ability to focus on the essentials even when under huge mental pressure.
Free diving has taught Janne how to maintain focus in stressful situations.
“Free diving is 95 percent mental. When you’re diving, you cannot think about anything else.”

Diving proceeds always the same way:
First, you start feeling that it’s a bit difficult – your mind is telling you to get out of the water.
“After that, you’ll reach a flow state where you can observe objectively your own feelings. The sport will certainly clear your mind after work. With loss of oxygen, if not otherwise,” Janne states, laughing.

Backpacking with an astronaut

After diving, Janne quickly changes into hiking boots and camo pants. Wearing exactly the same outfit, one summer Saturday, he took a NASA astronaut to have Karelian pasties for breakfast at the Joensuu marketplace.
“To be honest, I did it, so that the journalists of the local newspaper Karjalainen would have a fun point of view to write the story about the visit. It was way cooler when I took an astronaut to work at my summer place in the middle of nowhere, in my home region of Nurmes,” Janne continues.

Janne’s work as a CCO entails meeting customers both in Finland and abroad. NASA is Valamis’ best known partner for which Valamis is creating a new learning experience platform targeted at university students, researchers of different fields, astronauts and the youth interested in space research.

The idea for the collaboration was ignited by Janne’s legendary pitch, which was something between a joke and a vision.
“Space was a huge thing back then. People built their own space missions and were keen on following what was going on in space. The Mars hype was growing and space movies were a hit. Inspired by space, I mentioned that the coolest thing ever would be to cooperate with NASA.” 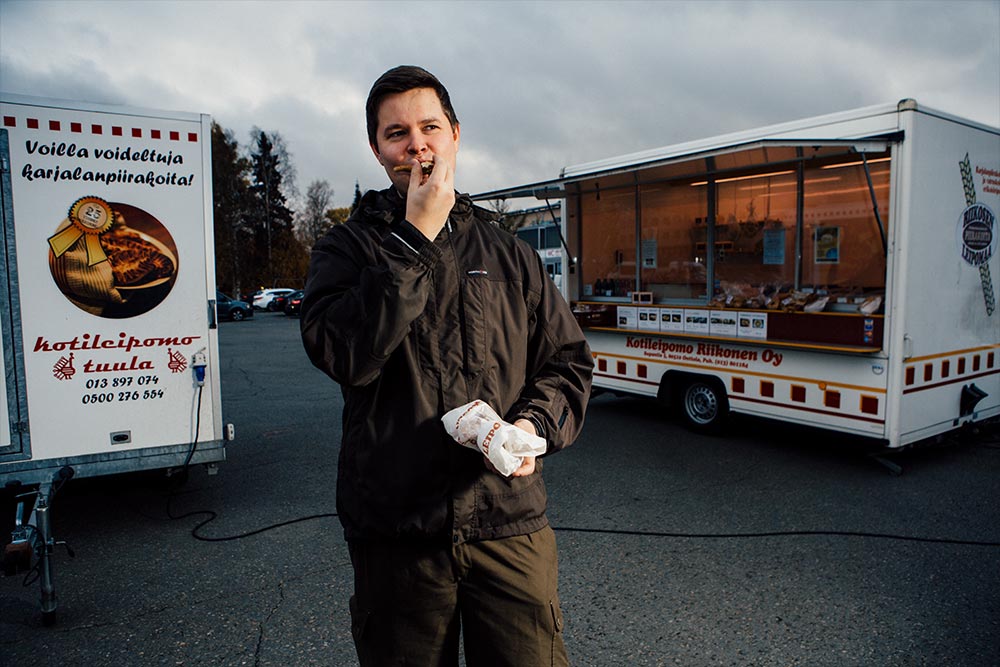 Later, when Janne got to pitch Valamis’ Valamis learning platform to NASA, they said that Valamis’ product was ‘the coolest thing ever’.

The cooperation between Valamis and NASA started in the summer of 2015. Now, the new learning environment is being tested in research and training programs in order to figure out whether it is possible to inhabit the planet Mars.

From time to time, Janne must travel around the world but, luckily, many of his tasks can also be completed from Karelia. When Janne speaks about Joensuu, you can hear the love for his home region from the tone of his voice.
“Thanks to the internationalization, Valamis has had the chance to affect its neighborhood. It’s wonderful that here, in the region of Joensuu, there are more and more companies whose founders originate from Valamis.”

One of Janne’s favorite moments during the NASA project was when he organized a joint project between higher education students in Eastern Finland and the space research center. An expert from NASA held a lecture.

Over a decade ago now, 35-year-old Janne studied information technology at the University of Eastern Finland. Janne completed university studies when he was in high school and started to write his master’s thesis in the second year at university. He finished his master’s thesis although other studies remain uncompleted. Nevertheless, Janne has gathered skills and competencies from other places.

A little banter at the office

Janne opens the Valamis office door in Joensuu wearing the familiar hiking outfit.
“We have started to suspect that he has a sponsorship from a local hiking gear store,” a colleague of his calls out while passing us.

Janne admits nothing.
“We have reached for a low-hierarchical environment that is as low as possible here,” he smiles.

The reason behind his outfit choice is not only practicality but also a genuine, unaffected atmosphere that he wants to cherish at Valamis.
“It really bothers me when the offices in the capital region talk about being ‘travel guides guide in the sea of digitalization’. You can talk about digitalization without these vague metaphors in a summer home, in the middle of the woods in Finland. If, here in Joensuu, we would try pretending to be something we’re not, it would feel like faking.” 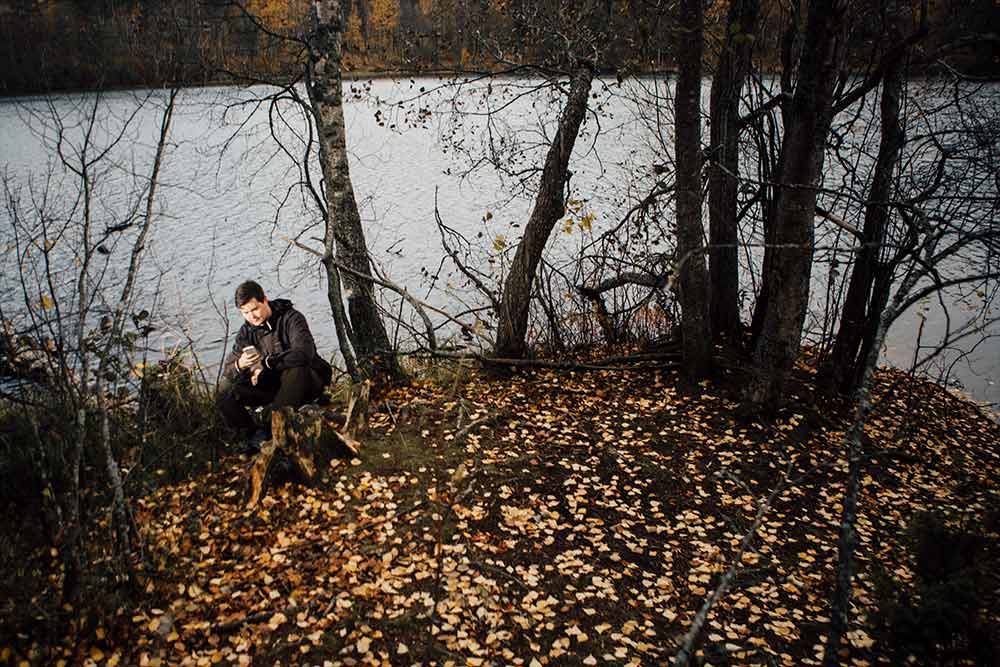 Nearly all Valamis’ competitors operate from Helsinki. At Valamis, it is believed that remote locations in places such as Oulu, Joensuu and Lappeenranta could be a competitive advantage to the company rather than a burden.
“We cannot be at our customers’ door as much as our competitors based in the capital region can, so we cannot invest that much, for instance, in lobbying. Therefore, good references are extremely important for us.”

“For many people, our dialect itself produces a kind of association with insanity and persistence. Legendary javelin thrower Seppo Räty is a good example of a North Karelian – quite a country man with a great deal of persistence.”

Conference calls from the mother-in-law’s wardrobe

“The core strengths of Valamis include team-like thinking and great teams. We supervisors do not determine how the tasks should be done; everyone works in a way that suits them best for the common goal,” Janne states at the Valamis Oulu office where he has driven to participate in the Executive Board meeting.

Valamis employees keep the team spirit up also outside working hours. Due to the love of  beer uniting many individuals working at Valamis, they have designed two Valamis beers. For the projects’ sake, they – naturally – traveled to Scotland to familiarize themselves with breweries. Almost every week, they go to movies, play floorball or have beer at a nearby hangout.
“I have tried to convince them to come diving with me by saying ‘just put weights around your neck and jump into the pool’, but somehow, still until today, they haven’t been convinced,” Janne jokes.

There are also ongoing competitions at the office. In addition to the traditional Friday bottle raffle, the employees compete on who can work while being in the weirdest place. For a while, Janne had meetings with NASA astronauts by the field of his sister’s farm. The current leader of the competition is an employee who negotiated with a customer from his mother-in-law’s wardrobe. These kinds of special arrangements are sometimes needed since Valamis employees have to be available for their customers based in the US, too.

Thanks to internationalization, Janne is now enjoying his work more than ever. He compares the change to sports.
“Those competitors who work only in the Finnish market play in the regional series. We play in the world championships. It takes a kind of Peter Vesterbacka-type insanity that we don’t apologize about being from this Nordic hinterland.”

Valamis has internationalized hand-in-hand with the diving hobby. In 2013, Janne dived in the world championship held in Serbia, although he never planned to dive in international competitions. It was the same with Valamis.
“Free diving by itself is already a mad sport. At this stage, there’s no point trying to compete in it. There’s something similar about entrepreneurship. It’s an extreme sport.”

How to restore the spark for learning

Janne sits down by the meeting room table for a while to drink his coffee before he has to run to a meeting. He would certainly have been surprised if, at the age of nineteen, he had seen himself here today wearing a blazer and getting ready for the Executive Board meeting. He was supposed to become an ordinary coder, not a business executive.

Somehow, the world of business carried him away. Self-confidence and competence have increased alongside the challenges provided by Valamis.
“I don’t think that I’m especially gifted; I just believe that everything is learnable and adoptable. Maybe my biggest gift is that I learn fast.”

Hobbies have also helped him to gather competence. Before diving, Janne was into, for instance, playing drums, mixed martial arts and building speakers.
“There was a point in my life when I played online poker pretty seriously. It is actually a pretty similar game of imperfect information as a sales situation is. You just have to know what others will do and trust probability calculations. Both in poker and in sales, you will make bad decisions if you let your emotions take over after a failure.”

Janne apologizes that he has to go now. In order to have enough time for work, hobbies and his family, it is vital that he follows his schedule strictly. After the afternoon meeting, Janne must drive off from Oulu to Liperi so that the family manages to spend some time together outdoors by a pond before his two daughters have to go to bed.

Janne is buttoning up his blazer already but decides to tell a little about a conversation he had with his four-year-old daughter a while ago.
“She asked me what I do for a living.” Explaining his job to a girl at that age is a bit challenging. In her eyes, her dad attends meetings, speaks on the phone, and sends emails.

However, already a child knows that when she’s playing with an iPad, she reaches goals and learns new skills. So, Janne told her that, at work, he tries to bring the same joy of digital learning to adults and the business world.
“I realized that if I am able to explain this complex business to a four-year-old, I think we understand it quite well.”

2017 was a busy year at Valamis, as new subsidiaries popped up in Germany and the UK. Janne was faced with a choice; he could lead Valamis’ international sales and focus on meeting the financial industry’s needs with the Valamis platform. Emotions varied from enthusiastic to a healthy amount of nervousness, and after including his family in the discussion, he was ready to decide.

Janne and his family settled down in London in August 2017. Nearly a year has passed and Valamis is searching for new employees to strengthen the UK sales team, and Janne needs to make sure Valamis’ company culture lives strong abroad. He visits Finland on a regular basis and communicates with his team in Finland and colleagues around the world on a daily basis. Janne is now sitting in the heart of the world’s financial technology center, Level39, and he knows the decision to move abroad with his family was absolutely the right choice.